Passive voice is important for IELTS. Whenever you speak or write, or try to understand reading passages, you need to have the ability to use and understand a good range of grammar.

However, a way that the passive is specifically needed for IELTS is if you get a process diagram in Academic IELTS Task 1. In this case you will use it throughout your explanation of the process.

So first we'll take a look at how to use the passive voice generally, then we'll see how it is used in a Task 1.

What are the Active and Passive?

When we use the active voice, the subject is doing the action of the verb:

When we use the passive voice, the person or thing receiving the action becomes the subject:

What are the Passive Voice Rules?

To make a sentence passive, we do three things:

These are examples of how we form it with different tenses (without the object in the passive):

We can also use the passive voice for infinitive and gerund structures:

However, you cannot use the passive with intransitive verbs.

So this can be made passive: "A cure was discovered".

But we cannot say: "He was died" or "Yesterday was died he".

When do we use it?

It is much more common to use the active than the passive, so you should only use it if there is a specific reason. Below are are the reasons that we use it.

Remember that this is usually a matter of choice for you, depending on the context in which you are writing.

2. When you think it is obvious who the doer is so it does not need to be mentioned

3. When the doer of the action is unknown or we don't want the doer to be known

4. When you think the doer is irrelevant

5. When you are writing for certain genres, such as science reports or for academic journals

When do we use the passive voice for IELTS?

As it is just a part of general grammar, you may use it at any point in the speaking or writing.

The time when you will really be in trouble if you don't know how to use it is if you have to write about a man-made process in Task 1 of Academic IELTS (for natural processes you use active voice).

Here is an example of a mad-made process diagram, where you have to describe the process of making chocolate: 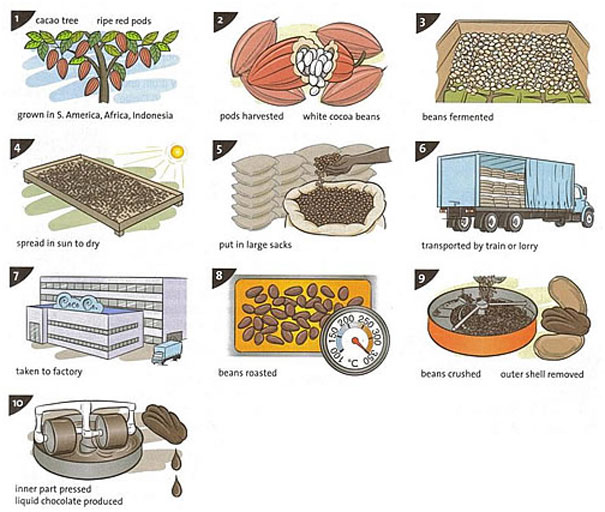 So in order to emphasize this, the activities are used as the subjects. Check out this model answer - the passive voice has been highlighted.

To begin, the cocoa comes from the cacao tree, which is grown in the South American and African continents and the country of Indonesia. Once the pods are ripe and red, they are harvested and the white cocoa beans are removed. Following a period of fermentation, they are then laid out on a large tray so they can dry under the sun. Next, they are placed into large sacks and delivered to the factory. They are then roasted at a temperature of 350 degrees, after which the beans are crushed and separated from their outer shell. In the final stage, this inner part that is left is pressed and the chocolate is produced.

You can view some more examples of process diagrams here:

You can now test yourself with the passive voice.

In the quiz, the sentence given is active. Write the passive sentence below.

DO NOT include the object i.e. "by ...", unless you are asked to do so. If you do it will get marked as incorrect. Include everything else.

Don't put a space or full-stop (period) after your sentence as it will also appear as incorrect, and start the sentence with a capital letter.

Here is an example:

Active: I have read the book

Answer: The book has been read