This model answer is for an IELTS Pie and Bar Chart combined.

Writing about two charts together can sometimes confuse candidates, so take a look at the graphs and model answer and see how you can successfully tackle this type of task. 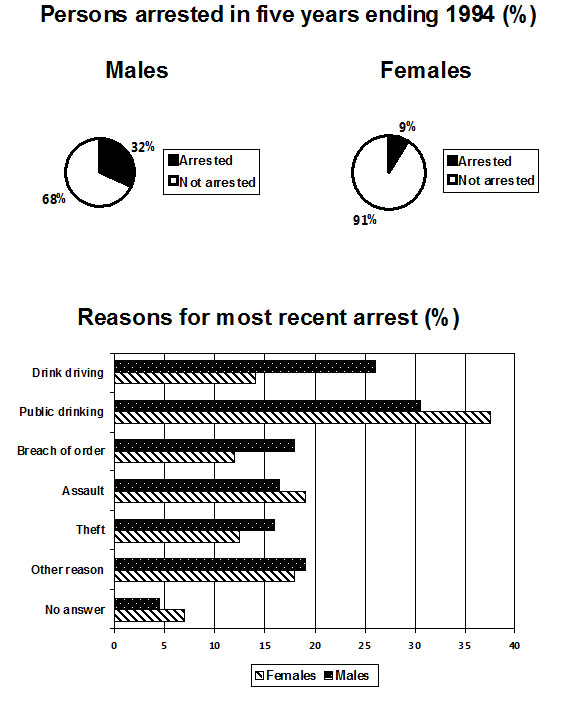 The pie chart illustrates the percentage of males and females who were arrested from 1989 to 1994, while the bar chart compares the main reasons that the different genders were arrested most recently. It is evident from the charts that males were arrested more than females and that public drinking was the most common reason for arrest for both.

To begin, the proportion of males arrested was much greater than for females.  32% were arrested compared to only 9% for women. Turning to the reasons for the most recent arrests, there were some clear differences between men and women. Men were twice as likely to be arrested for drink driving than women, at 26% and 14% respectively. Breach of order, theft, and other reasons were also slightly higher for men, with all these offences standing in the range of 12-18% for both sexes.   Interestingly though, women experienced a higher percentage of arrest rates for assault and public drinking. The figures for assault were fairly similar at approximately 18%, whereas public drinking represented the main reason for arrest, with women at a massive 38%, compared to 31% for men. In a small percentage of cases, no answer was given.

One of the big problems IELTS candidates can have is knowing how to write about two charts, such as a pie and bar chart, together.

The best thing though is to simply describe one and then the other rather than trying to link them together.

This response is easy to follow as it firstly describes what is happening in the pie chart and then goes on to discuss the bar chart.

In the overview you should mention both the pie and bar chart.

two graphs together in this lesson