This is a sample IELTS bar chart showing the different transport modes used in a European city.

The following bar chart shows the different modes of transport used to travel to and from work in one European city in 1960, 1980 and 2000. 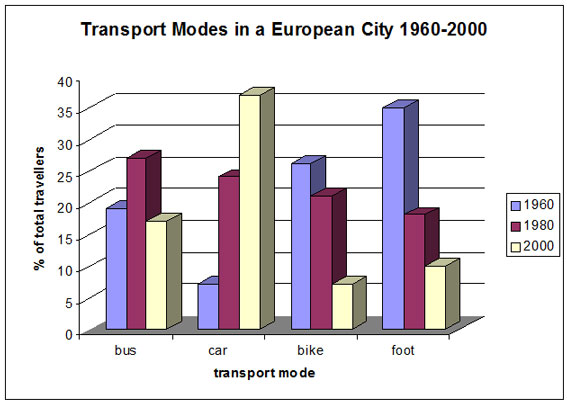 In detail, in 1960 the motor car was used least as a method of transport with only about 7% of the population using this method but car use grew steadily and strongly to finally reach about 37% of the population by 2000. This was a massive 5-fold increase in use.

Over this same period, however, the popularity of walking, which had been the most popular means of transport with 35% of the population in 1960 having it as their preferred way of getting around, fell to 10%. Bicycle use also fell from a high of about 27% in 1960 to just 7% in 2000.

This IELTS bar chart would get a good score as it meets the requirements of the task.

You have to think carefully how you will organise your it as there are usually a few options.

For example, in this case organising by years or by modes of transport are two possible options. In the IELTS bar chart response, it has been organised by mode of transport, with each discussed in turn.

Good organisation is essential for a high score as without it the examiner may get confused as they read it, thus affecting your score for coherence and cohesion.

There are several examples in the IELTS bar chart of the language of change used well:

You must also make sure you have complex sentences and structures in your description.