This is a model of an IELTS bar graph. The topic is team scores.

In a bar graph data is organised into columns showing the data. In this case the information is over time so you have to use the language of change to describe the data.

The bar chart shows the scores of teams A, B and C over four different seasons. 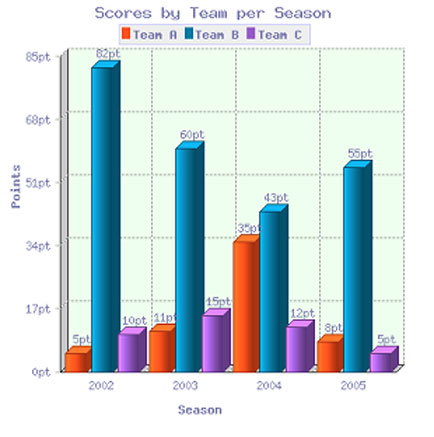 The bar chart shows the scores of three teams, A, B and C, in four consecutive seasons. It is evident from the chart that team B scored far higher than the other two teams over the seasons, though their score decreased as a whole over the period.

In 2002, the score of team B far exceeded that of the other two teams, standing at 82 points compared to only 10 for team C and a very low 5 for team A. Over the next two years, the points for team B decreased quite considerably, dropping by around half to 43 by 2004, but they still remained above the points for the other teams.

However, though team A and C's points were lower, they were rising. Team A’s points had increased by 600% from 2002 to reach 35 points by 2004, nearly equal to team B. Team C, meanwhile, had managed only a small increase over this time.

In the final year, team B remained ahead of the others as their points increased again to 55, while team A and C saw their point scores reverse and drop to 8 and 5 respectively.

The largest or biggest data is not always the most important but in this case you should see that what stands out above everything else is the size of Team B. It's much higher than the others throughout the period.

So in this case this is likely to be a good piece of information to select for the overview (the main trend of the IELTS bar graph):

It is evident from the chart that team B scored far higher than the other two teams over the seasons, though their score decreased as a whole over the period.

It is then important in your description to pick out the main features and make comparisons as you are told to do in the prompt.

What you should not miss as they are likely to be seen to be key features by the examiner are:

The importance of Team B in this IELTS bar graph is highlighted in the first body paragraph, with detail on how it remained high and above the other two teams.

It is then pointed out how Team A and C's points increased, especially A, then fell again, while Team B rose again at the end after falling.

So the IELTS bar graph picks out the key features of the graph and makes comparisons, which are important for a good score.

Learn more about how to respond to a graph over time.

As with all graphs and charts, you will also need to make sure you are comparing and contrasting the data.