Here is an IELTS sample bar graph on the topic of British emigration.

The chart shows British Emigration to selected destinations between 2004 and 2007. 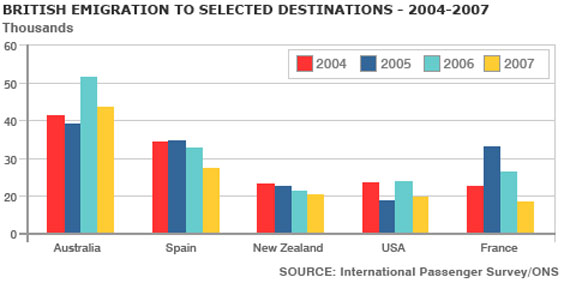 The bar chart shows the number of British people who emigrated to five destinations over the period 2004 to 2007. It is evident from the chart that throughout the period, the most popular place to move to was Australia.

Emigration to Australia stood at just over 40,000 people in 2004, which was approximately 6,000 higher than for Spain, and twice as high as the other three countries. Apart from a jump to around 52,000 in 2006, it remained around this level throughout the period.

The next most popular country for Britons to move to was Spain, though its popularity declined over the time frame to finish at below 30,000 in 2007. Despite this, the figure was still higher than for the remaining three countries. Approximately 20,000 people emigrated to New Zealand each year, while the USA fluctuated between 20-25,000 people over the period.

Although the number of visitors to France spiked to nearly 35,000 in 2005, it was the country that was the least popular to emigrate to at the end of the period, at just under 20,000 people.

The bar graph starts by introducing what it shows. Importantly, it paraphrases the prompt rather than copying it.

There is then a good overview which selects the main trend in the graph.

It is clearly organised, describing the most interesting data first, which is the high emigration levels to Australia. The second body paragraph then focuses on three other countries, which were lower than Australia but did not fluctuate much over the years. Lastly France is described, with the fact that it spiked in one year highlighted.

The content is good as key trends are identified and highlighted, comparisons are made, and data is selected to support the description when needed.

There is also a good mix and range of vocabulary and grammatical structures.

The bar graph also meets the requirements of being at least 150 words.