This is a sample pie chart for IELTS task 1.

In this example, there are four pie charts that you have to compare, which makes it quite difficult.

So you need to decide the best way to structure your answer to make it easy to read and follow.

The pie charts show the electricity generated in Germany and France from all sources and renewables in the year 2009. 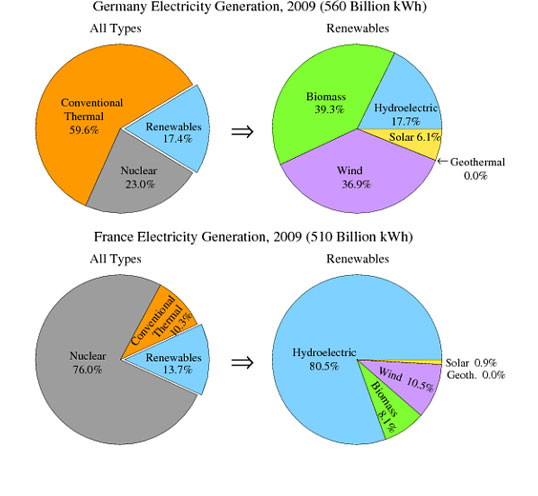 Moving on to renewables, this accounted for quite similar proportions for both countries, ranging from around 14% to 17% of the total electricity generated. In detail, in Germany, most of the renewables consisted of wind and biomass, totaling around 75%, which was far higher than for hydroelectric (17.7%) and solar (6.1%). The situation was very different in France, where hydroelectric made up 80.5% of renewable electricity, with biomass, wind and solar making up the remaining 20%. Neither country used geothermal energy.

In order to make the answer clear, the writer has organised the chart by categories and types of energy.

So the first body paragraph compares 'All Types' for both countries, and examines each energy in turn, before moving on to 'Renewables' and doing the same thing.

This makes it easy to read and follow, meaning that it will get a good score for it's cohesion and coherence, but also for Task Response as this method means there is plenty of comparison between the countries and energy types.

Still unsure about this type of chart? There is a great lesson here on how to write IELTS Pie Charts.