This writing task 1 pie chart is discussing proportions of staff employment in the public sector over two years.

There are two charts, and if possible it's better to try and compare categories together ('age' in this case) rather than just describing one pie chart then describing the other.

By doing this you will better highlight particular similarities and differences over the years.

Now take a look at the question and model answer. There is a discussion of why the writing task 1 pie chart would get a good score below the model answer.

The chart below shows the proportion of staff employed by age in the public sector in the UK in 2015 and 2020. 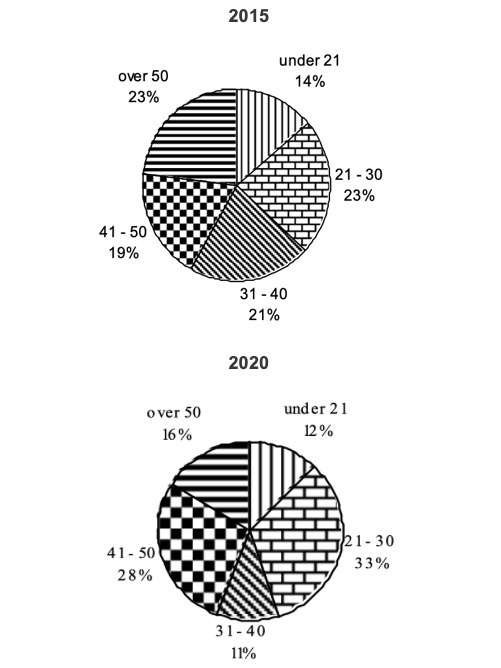 The pie charts illustrate the ages of people employed in the UK public sector during two years, 2015 and 2020.  Overall, while the percentage of those employed in their 20s and 40s increased, employment for other ages groups, particularly the over 50s, fell.

The description fulfils the task as it summarises the information from the graph, selects the key information, and makes comparisons of the data.

Rather than just listing each point it shows how each has changed over the two years, highlighting particular differences.

There is also a clear overview presenting the main trends over the years:

Overall, while the percentage of those employed in their 20s and 40s increased, employment for other ages groups, particularly the over 50s, fell.

The writing task 1 pie chart is well organised into clear paragraphs, with the first body paragraph discussing the general categories that have risen, and the second showing which have fallen.

There is a good mix of vocabulary, such as using 'rose', 'increased' and 'climbed' or 'fell', 'plummet' and 'drop' rather than just repeating one particular word. There is also a good mix of compare and comparison language more generally.

There is also a good mix of sentence types, with several examples of complex sentences, such as: