In an IELTS task 1 map you often have to compare a map from the past with one from the present.

This writing task 1 sample map shows you an example of one of these types of question with a model answer.

You have several choices of how to organise an IELTS task 1 map such as this.

You could choose the various features in turn, such as the fishing port and market in the past, then note how these have now gone, with the market replaced by apartments.

Either way, make sure you describe all the key features in the IELTS task 1 map and don't miss any.

The map below shows the development of the village of Ryemouth between 1995 and present. 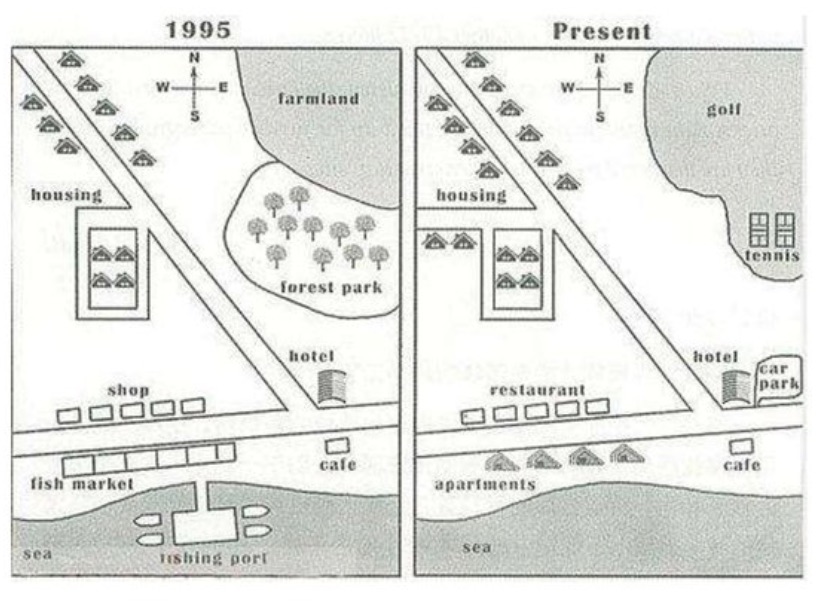 The map shows how a village called Ryemouth has developed over the last twenty-five years. There have been several changes, the most noticeable being the increases in accommodation, the elimination of the fishing industry, and the introduction of sports facilities.

In 1995, to the south of the village where the sea is there was previously a fishing industry, with a fishing port and quite a large fish market as well. Next to this was a small cafe. On the other side of the road running by the sea stood a line of five shops and a hotel, while situated in the north east part of the village was farmland and a park with trees. The main housing of the village was located in the north west around a main road that runs from the coastal road, with twelve houses, four of them encircled by a smaller side-street.

Turning to the present day map, it can be seen that the fishing facilities have all gone, being replaced by four apartments, and the shops have become restaurants. The cafe remains, as does the hotel, albeit with parking facilities which it did not have before. Having been converted into a golf course, the farmland has now gone, while the forest park has been removed to make way for tennis courts. Although the old houses remain, new ones have been built, along with a new road with two new houses beside it.

This IELTS task 1 map would receive a high score.

The map has a clear overall progression and organisation as it is introduced, the main features are identified, then it clearly compares the first map with the second.

There is a mix of vocabulary, with the right language of location used to say where things were positioned and the language of comparison and contrast used to good effect to show how things differed or remained the same.

There is a good range of accurate complex sentences and structures to ensure a higher score for grammatical range and accuracy.

Some examples of these are: