In this IELTS map sample, also sometimes considered as an IELTS plan, you have to compare the layout of a park in 1920 with today.

When you write about an IELTS map or plan, you should make sure you mention all the features shown.

You could start by describing fully the first map then move onto the next, as is the case in this IELTS task 1 map. However, another way it to do it by the features.

This is an IELTS map sample where the latter organisation is used, and each feature is discussed in turn.

Now take a look at the model answer.

The plans below show a public park when it first opened in 1920 and the same park today. 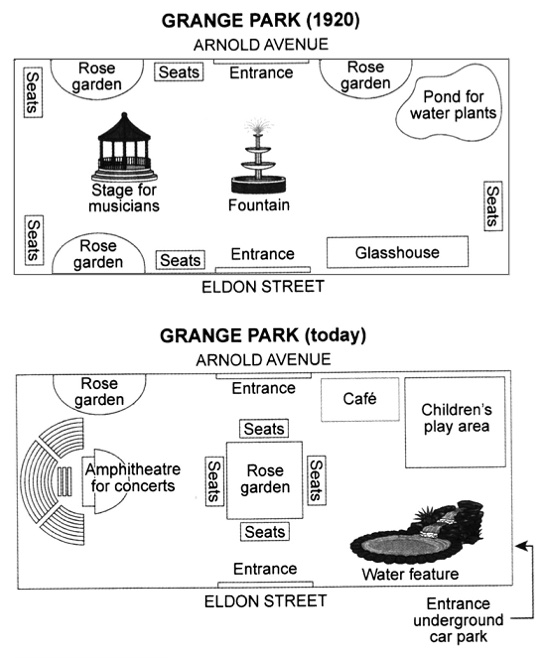 The map compares Grange Park in 1920 with the current time. Several features have moved, but a main change is the development of an amphitheatre, a water feature and the removal of the fountain.

Looking at accessibility, the park kept it’s two original entrances on Arnold Avenue and Eldon Street that have been there since its opening in 1920, but on today’s map we see they have added underground parking for cars off of Eldon Street as well.

They kept an entertainment area in the same location in the west of the park, though it has been upgraded from a stage to a full amphitheatre. The park's water attraction, formerly a pond with water plants in the north-east corner, has moved and is now a water feature where the glasshouse once stood.

While today’s park no longer features the central fountain, it does now include a cafe and children’s play area for visitors to enjoy, along with plenty of open space around the features..

The IELTS map sample is organised well as it clearly explains the information from each of the time frames one-by-one.

It fully fulfils the task as it makes comparisons of each of the features, explaining exactly what has changed or remained the same.

It has an overview at the beginning that mentions some of the changes (it's not enough just to say that changes occurred - you should mention the main changes).

There is some good use of locational language in the IELTS map sample as the response regularly mentions where things are located and uses some language of location, such as 'north-east'.

You must also place in some complex sentences, and this has been done in several places, with the use of adverbial clauses for example.