With IELTS map writing, you often have to describe how a map has changed over a period of time.

If you have two maps, one in the past and one from the present day or just later in time, then you need to make sure that you describe each one, and refer to each feature that is evident on the maps and how it has (or has not) changed.

For IELTS map writing, important language when it is something like a city, town, or region, is the language of location, such as 'north' or 'south west' etc.

The two maps below show an island, before and after the construction of some tourist facilities. 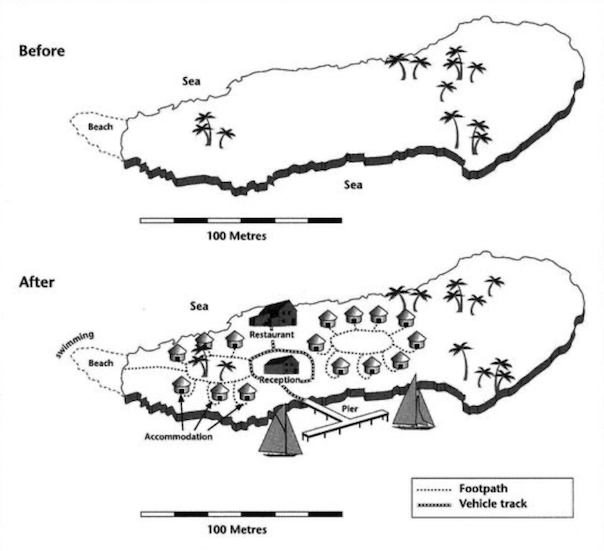 The maps illustrate the changes that have occurred on an island due to the building of facilities for tourists.

The island originally consisted of just palm trees and the beach, yet now, although the palm trees remain, it hosts a wealth of attractions for holiday makers, from restaurants and swimming to accommodation.

The island is approximately 200 metres long, with a small beach on the western tip. It was deserted before, with only a scattering of palm trees. Now though, there is an abundance of places to stay in the form of fifteen beach huts situated in circular patterns in the centre of the island and to the west.

Between these two sets of accommodation there is also a new large restaurant and a reception building, both served by new vehicle tracks. Situated in the south is a t-shaped pier for ships to dock, and sailing boats are now evident in this area of the sea. Footpaths have also been constructed, which traverse the island, leading to the new buildings and also the beach, where tourists can now swim.

This IELTS map writing answer would score highly in IELTS.

It meets the requirements of the task as both maps are explained and all the features and changes are highlighted.

The introduction clearly sets out what the map is about (paraphrasing and not copying from the prompt) and then there is an overview of some of the key changes.

It is well-organised into clear paragraphs, with the first detail paragraph setting out how the island used to look, and how it now has a lot of accommodation. The final paragraph then describes all the rest of the changes.

There is a good mix of vocabulary with some good language use and collocations, for example:

There is also good evidence of complex structures, seen for example in complex sentences ('although', 'though', 'which', and 'where'), passive voice (Footpaths have also been constructed) and nominalisation (Situated in the south is a...).