This IELTS line graph sample answer is about Co2 emissions of four countries over several decades.

It's always important to spend a few minutes thinking about how best to organise and present your answer.

With line graphs, look for similarities and differences with the trends (lines) presented.

You may find you can then link patterns together in paragraphs to make your answer logical and organised.

Take a look at the IELTS sample line graph and see how it has been organised. How have things been grouped together?

The graph below shows average carbon dioxide (Co2) emissions per person in the United Kingdom, Sweden, Italy, and Portugal between 1967 and 2007. 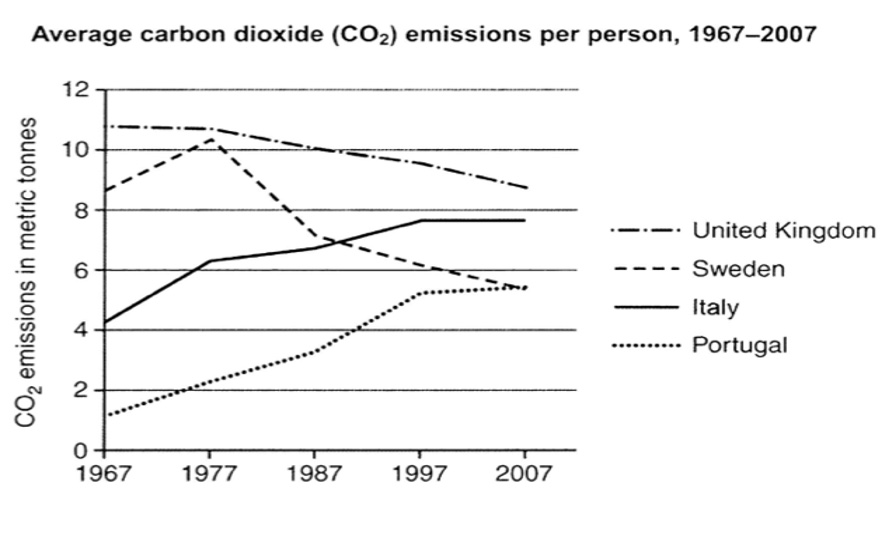 The chart presents the average CO2 emissions per person in four European nations from 1967 to 2007.

Overall, average CO2 emissions of individuals in the UK and Sweden generally dropped, whereas emissions per person in Italy and Portugal rose significantly. Despite the steady reduction, average emissions in the UK were the highest in the given period.

This IELTS line graph sample answer is good and well-organised.

You hopefully noticed that while emissions from two countries went up during the period, they went down for the other two. So the writer has used this as the basis for the graph's organisation.

This shows the examiner you are able to pick out trends and make clear and logical comparisons.

The writer has also picked out the important things to discuss and there is good use of vocabulary and grammar.