In this lesson we'll look at an IELTS task 1 line graph in order to help you understand how to deal with 'age groups' and to show you how it is possible to organize an answer in different ways.

One way is not necessarily better than another. However, if one way is difficult to follow, then this is obviously not the best choice.

What is important when you plan a task one is to think about how you can organize your graph in the most logical and clear way.

This often means grouping the information in some way, and you can do this by looking for patterns - look for similarities and diffferences.

This sample IELTS task 1 line graph is divided up into age groups.

Although a graph like this is not over time as such, it can still be viewed in this way as it is showing how something changes over different ages - in this case, how certain factors in a neighbourhood when choosing a new home vary over age.

Take a look at the following question, the IELTS task 1 line graph below, and the model answers.

The line graph shows the percentage of people of different age groups and how they rate a set of factors in terms of importance when buying a new home. 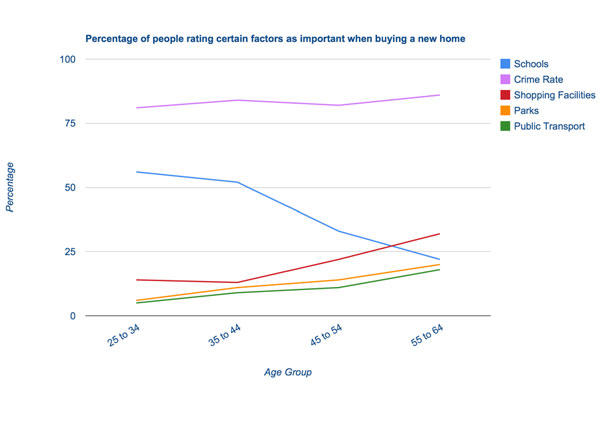 The line graph illustrates the importance, measured in percentages, that four ages groups place on five different factors when they move to a new home. It is immediately apparent that a low crime rate is the most important variable across all the age groups.

Of all the factors, the desire for a low crime rate is by far the most important. Amongst the all the age groups this figure stands at around 80%, with the middle aged and elderly viewing it as slightly more important. Next, schools are seen as very important by a significant proportion of 25 to 44 year olds although the percentages drop markedly as people get older, with just under 25% of 55 to 64 year olds viewing this as important.

Shopping facilities, being chosen by around 13%, are not viewed with such importance as schools and crime by the younger age groups. However, as people get older, this increases in importance to approximately 30%, and, as would be expected, is actually more important than schools to those over 55. Finally, although increasing in importance with age, neither parks nor public transport are viewed to be as important as the other factors by any of the groups.

As you can see in this answer to the IELTS task 1 line graph, the candidate has organized the answer mainly around the 'factors'.

Each one is described in turn, starting with the most important, low crime. Less is said about those that are not viewed as so important (parks and public transport).

Notice that the graph does not talk about each factor in isolation, but makes comparisons across the factors and groups. For example:

Of all the factors, the desire for a low crime rate is by far the most important.

Shopping facilities are not viewed with such importance as schools and crime by the younger age groups.

With an IELTS task 1 line graph you should always avoid simply discussing each point on a graph with no reference of how it relates to the other points.

The line graph illustrates the importance, measured in percentages, that four ages groups place on five different factors when they move to a new home. It is immediately apparent that a low crime rate is the most important variable across all the age groups.

The factors that are very important when purchasing a new house are very similar for the first two age groups. A low crime rate represents the greatest percentage of these groups at around 80%, though it is slightly higher for those aged 35 to 44. Schools as a factor is again very similar at around 60% for the younger age group, but dropping to around 45-50% for 35 to 44 year olds. A much lower percentage rate shopping, parks and public transport as important.

Turning to those aged over 45, low crime accounts for the largest proportion at approximately 80%, similar to those of a younger age. In contrast to the younger groups though, schooling was far less important, falling to below 25% for those aged over 55. This older group rate them as less important than shopping facilities. In fact, shopping facilities, parks and public transport all become more important factors as people get older.

This IELTS task 1 line graph has been organized primarily around the age groups.

The candidate has decided that the first two age groups are fairly similar and so can be grouped together, and the second two age group have similarities.

The differences between the under 44s and over 44s have also been highlighted. For example:

Turning to those aged over 45, low crime accounts for the largest proportion at approximately 80%, similar to those of a younger age.

This lesson has been about how to write about age groups and examples of how answers may be organized differently.

Although this was about an IELTS task 1 line graph, it applies to any graphs or charts in task 1, such as bar graphs or pie charts.

You need to make sure that you spend a few minutes analyzing the graph and deciding on the best way to organize it so it will be easy to follow when the examiner reads it.