Describing an IELTS table is similar to describing charts or graphs.  The same structures of comparison and contrast are used or language of change if the table is over time.

A table is just another way to present information.

You can also watch a video of this lesson:

It does not require that you learn a new type of language or a new way to organize things.

For example, take a look at this IELTS table showing the quality of life in four countries presented in a table:

If we wanted, we could present this same information as a bar chart: 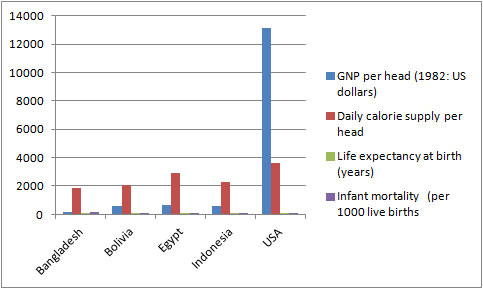 However, as you'll notice, it is better presented as a table because of the huge difference between the USA and the others - this is not very clear on a bar chart.

So a table looks better, but they would both be described in exactly the same way.

As with all graphs and charts, when describing tables:

Look at the IELTS table that you looked at above and answer the questions that follow:

The following table gives statistics showing the aspects of quality of life in five countries.

Table: The Quality of Life in Five Countries

You should always ask yourself these kind of questions before you write your task one. You can then use the answer to these questions to make yourself a quick plan.

Here are some notes made by a student during the planning stage:

Now, take a look at this IELTS table model answer and notice how the organization matches the plan. The groups chosen that are similar are grouped together into paragraphs.

The language is focused on the language of comparison and contrast as the table is not over time. The compare and contrast structures have been highlighted so you can see how they are used.

Is it similar to the way you would have organized the information?

The table uses four economic indicators to show the standard of living in five selected countries in 1982.  Overall, it can be seen that the quality of life in the USA was far higher than the other four countries.

To begin, the USA, which is a developed country, had the highest GNP at 13,160 dollars per head.  It also had a much higher daily calorie intake and life expectancy, and the lowest rate of infant mortality, at only 12 per 1000 live births.

Quality of life was much lower for the other four countries. The indicators for Egypt, Indonesia and Bolivia were fairly similar, with their GNP ranging from 570 to 690 and daily calories in the 2000s. Life expectancy was also almost the same, although Bolivia had much worse infant mortality at 124 per 1000.

Bangladesh had by far the lowest quality of life in all the indicators.  Its GNP per head was approximately one percent of the USA’s.  Its calorie intake and life expectancy were about half those of the USA, and its infant mortality rate was 11 times greater.